The age of the universe is 15-20 billion years old.

"The oscillating universe theory is a cosmological model that combines both the Big Bang theory and the Big Crunch as part of cyclical event. That is, if this theory holds true then the universe in which we live exists between a Big Bang and Big crunch." - John Carl Villanueva 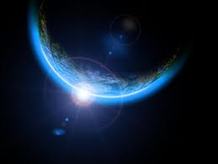 * 'steady state' means stable condition.
* Proposed by Herman Bondi, Thomas Gold, and Sir Fred Hoyle.
* "The Steady State Theory states that our universe looks the same from every spot in it and at every time." - www.swirk.com
* a steady state universe has no beginning or end.
* The steady state theory states that although the universe is expanding, it does not change its look over time.

* The Big Bang theory is an effort to explain what happened at the very beginning of our universe.

Which theory is the most accepted?

The Big Bang theory is the most accepted because it fits the evidence better than anything else we've thought of  and the predictions the theory have been tested and found to be true.
Powered by